Hello, I’ve been testing TotalSpaces and I like it so far. But I hate having to use it with Mission Control. I’d like to simply get rid of MC for good. Would you please consider creating a TotalExposé to replace the one on Snow Leopard?

Could it be done?

Please consider it! I would buy both applications without questioning. TotalSpaces needs a TotalExposé, it only makes sense!

Oh, and it would be really nice to change the configurations at the Settings panel. Hot corners and all. Just like Snow Leopard.

Does the Single Desktop Exposé feature do what you need? See Hotkeys prefs, or Hotcorners prefs (“Toggle exposé”)

It doesn’t show minimised windows, but it does show all windows on the current desktop.

More or less. I’m aware of that “toggle exposé” option, and it is almost what I meant.
In the native mission control (I am on Mavericks now) if you click and hold the app icon with minimised windows it will show all windows including minimised ones. That, I believe is identical to the original exposé, but exposé allowed me to see all applications in a single desktop as well.

In that sense, TotalSpaces can show everything from everywhere (and that’s great), but not everything from one single area and everything minimised.
So for example, I use top-right hot corner to see all spaces, then bottom-right to trigger “toggle exposé” when on the grid. But if I’m not on the grid, I see mission control. I would like to see all windows in the current desktop.

So I am guessing it would not be a great ordeal to have it as a new feature soon, I guess you nailed most of the exposé stuff, except that it works only in the grid. Could you consider having it off the grid too?

Thanks a lot for the feedback, that’s really nice.

Sorry I’m a bit unclear as to the exact requirement - if you aren’t on the grid, and you are using the most recent TotalSpaces2, then the Toggle Exposé hotcorner should show the windows in the current desktop (if you use it when not on the grid). Unless you also have that hotcorner assigned to Mission Control?

I wanted to do this (screenshot taken from Snow Leopard with default Spaces & Exposé apps): 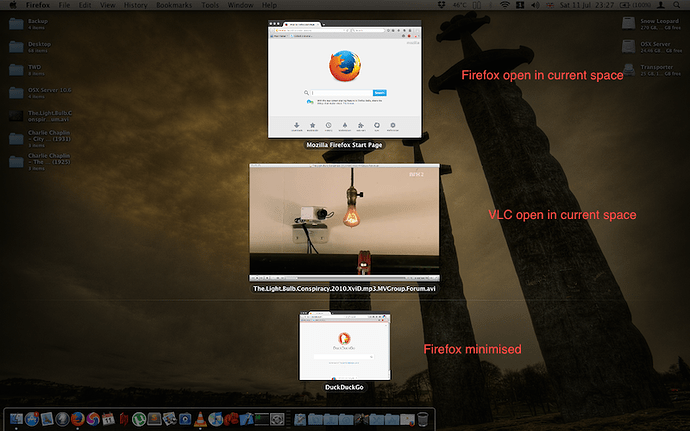 Would you consider it?
Thanks!

OK I understand. Displaying minimised windows would certainly be something new for TotalSpaces. I am sorry I’m not really thinking about new features at the moment due to El Capitan.

I agree that this would be useful to see minimised windows, is this in the pipeline now?