Go back to first dekstop

Hi everyone, I found out about totalspaces this afternoon and I was really excited because it was something that I had been looking for for years now. Finally and equivalent to the alt+esc on windows.

I have been looking but I just can’t find a way to set a hotkey to go back to the first desktop. I don’t know if you guys are familiar with the Macintosh’s virtual desktops. In the settings, you have the option of setting a shorcut just like in TotalSpaces to go back and forth between the desktops but you can actually also assign a hotkey to every single desktop so that for example - If you have created 6 different desktops but you are only using 4, you won’t have to go back 3 times or (in Totalspaces) move forward 3 times since when you move to the right from the last one, it brings you back to the first one which is cool.

When I’m usually using all 6 of them, it’s totally cool. But sometimes, instead of having to delete a column in the settings because I don’t want to see the empty desktops, it would be cool to have the option to boom alt+1 and go back to the first desktop. Boom alt+4. Desktop 4.

If there’s a way to set up something like that, can someone please tell me!

Are you wanting to assign specific hotkeys to specific desktops? If so, you can accomplish what you’re after in System Preferences > Keyboard > Shortcuts > Mission Control. See below: 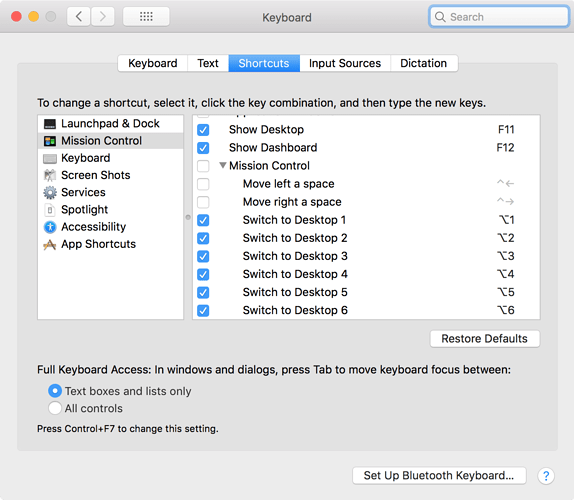 oooooh the first thing I did after seeing that totalspaces2 works was to remove all my mission control shortcuts. I just put back my old hotkeys and it works. Thank you!!!