You can report bugs/issues here in the forum post. Thank you for your feedback.

Frankly, it’s hard to find developers these days that really care about their products and continue to update them regularly. I really consider you one of them, and without total finder I wouldn’t even use finder at all. That’s why I have total spaces as well, even tough I don’t use it. I will gladly support devs like you anyday!

Keep up the good work

Wow that was quick!

Thanks for this beta - not realised just how much I rely on Total Finder until it was not there!!! Biggest issue remaining (for me) is the lack of ‘folders on top’ - never understood why Apple did not offer that as an option since (it seems to me) to be the most logical way to display stuff (maybe that’s because I spent 30 years as a Windows guy…).

BTW: until this new beta I tried Path finder but it down not come close to Total finder!!

Drag and drop from one tab to another would not work until I closed and reopened the target tab. Even then there was no + sign as the file was held over the target tab (but it did transfer).
hope this helps
cheers

MacBook Pro Retina January 2014. Not having the Visor blurry issue either.

Just installed TotalFinder with my OSX 10.11 installation and am unable to scroll. Finder OK without TotalFinder.

If TotalFinder ends up “dying” due to system protection, would it be possible to create a totally separate, new finder app that did the same things (and/ or more) than TotalFinder injected into Finder? Apple’s never going to give us everything you have; but you could effectively rewrite the Finder from scratch and include your own features. This happens on the Windows side of the world all the time. There are a great many File Explorer replacements. It would be nice (and worth at least the $18 registration fee) to have something like that available.

Just a thought tho…

Looks like it’s dead under today’s b2 release. I get an error that Apple Events cannot be delivered, and restarting appleeventsd does nothing.

We’ll have a look, but this may be, as we feared, due to system integrity protection - for reference see http://blog.binaryage.com/on-el-capitan/

no option to continue anyway; followed the ‘more info’ link but did not help…

TotalTerminal still works. TotalFinder does not work anymore. They both use the same injection mechanism/code. So it seems that Apple decided to disable apple-script-based injections on per-application basis or maybe depending on their location in the filesystem.

I don’t want to make a quick conclusions. But at this point I think Apple’s intention is clear and even if we found a way around it, they would block the particular method in the next release. 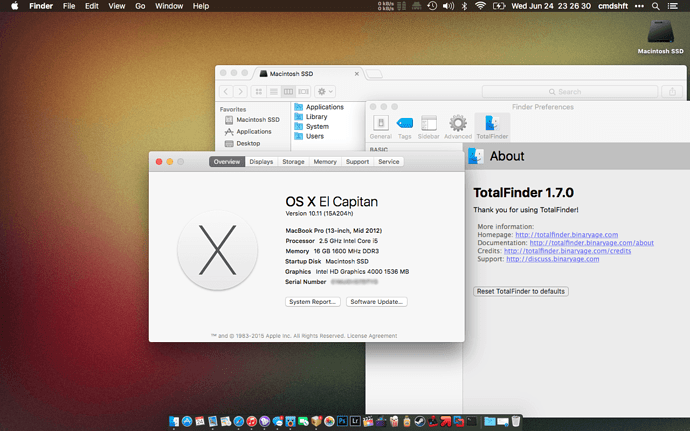 @darwin Have you guys considered making a complete finder replacement? Something like Path Finder, but with the features and look of TotalFinder. If you do end up making something like that to work around the issues in 10.11, I would definitely buy a copy, even if it costs more than TotalFinder currently does. Maybe you could call it TotalFinder Pro

If you do end up making something like that, you might consider opening up pre-orders to support development while you work on it. I would definitely be one of the first people to pre-order it, even though I’m on 10.10.3 and can still use the original TotalFinder.

While I’m sure it would be a lot of work to turn TotalFinder into a complete finder replacement, I think it would open up a ton of possibilities that can only be done with complete control over the app. One of the features you might be able to add would be faster file copying, like TeraCopy on Windows but built-in. Maybe it would also make it possible to get rid of that annoying issue I keep getting where sometimes TotalFinder restores the session with every tab going all the way back to the root on the left (in column mode) instead of whatever sidebar item I started with.

Anyway, if you make a complete finder replacement, I would definitely support it.

must have gotten lost installing the beta 2 update…

thanks for the fast beta

The fix above also works for me on beta 2. Thanks for posting it!

After setting rootless and rebooting TotalFinder now works for me on beta2…
so much better/easier/intuitive than Path Finder!
cheers
PS please don’t give up!

Yes, the fix works fine for beta2…and not only for TotalFinder…