I have noticed that applications will display in the wrong spaces after running total spaces for a while. For example I have 6 spaces and sublime on one space and firefox on another space and the rest are empty. Sometimes when I use the keyboard to switch to firefox sublime will display on the space as well. Additionally if I switch from there to an empty space sublime is there too. If I switch spaces enough the system sometimes will remember where things go and start working normally again. I have confirmed that “Move current window” is not active. Usually I just kill total spaces and relaunch it. From there it knows where all the windows are and keeps track of them for a while then it eventually get confused again. Rinse & repeat. Any idea how to fix this or if this will be resolved in a new release?

That’s odd. Do you use the app assignment feature to assign apps to particular spaces? Or you just start an each app on the space you want it on?

I guess the latter. but either way I’m not sure why your windows are moving.
One thing that can happen is that if you are clicking on the title bar of a window when you change space then the window will move also. But if you aren’t doing this, then I don’t see why the window would move.

Can you think of any other clues - anything else that might trigger the issue?

I also have a wrong space problem. When I had iBank open in a space, hot-cornered to the grid and clicked on that space, it would immediately switch to the top left space in my 4x4 grid. If I moved iBank to another space and did the same, the same switch would occur. At no time did the switch occur when clicking on any other space. And restarting iBank has now removed the problem, though I have had it several times in the past few weeks.

Correct. I don’t use the assignment feature. I just open the apps is a space. I’ll try to get a screen cast next time it does it.

Ok. I grabbed a screen cast of the craziness. https://dl.dropboxusercontent.com/u/2105172/toatal%20spaces%20crazyness.mov

You will see that sometimes windows appear in random spaces mysteriously but don’t show in the space overview. Sometimes moving from a space to the space above will transport me to a diagonal space. Its very strange. I haven’t noticed a cause yet other than that is just starts after a while of use. I’m on a mbp with 2 external monitors running Yosemite 10.10.5. Let me know if you need anything else. Thanks.

I’m wondering if the hotkeys you are using are conflicting with mission control shortcuts?

Can you please check in System Preferences->Keyboard->Shortcuts->Mission Control ?

Hmm… It shouldn’t be. I have them all turned off. 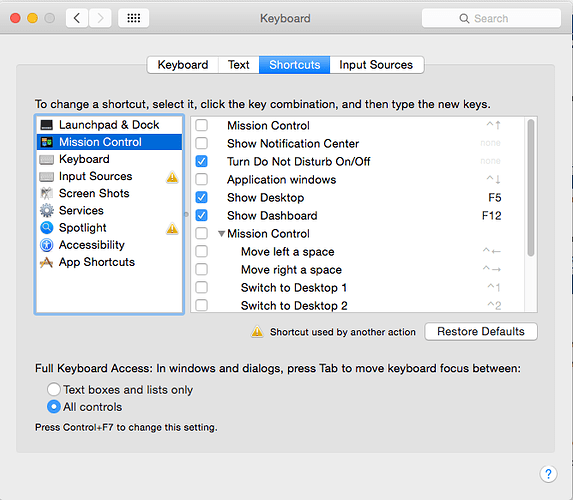 I am running into the same problem with v2.4.9 and El Captain. Looks like this is still an issue in 2017.