When switching between screens in 2.2.16, there is no longer any transparency. Instead it is just this ugly opaque gray.

Not to mention that your “an update is ready” screen is ANNOYING!!! Every hour, really?!? If I don’t want to update now, don’t ask me again EVERY SINGLE HOUR until I finally give in! And then don’t put this window that is on top of EVERYTHING in my way for the 20 minutes it takes to download the damn update (I’m currently in Peru and internet is SLOW here).

If you’re tired of the update checking just uncheck “Automatically check for updates” in the TS Preferences window: 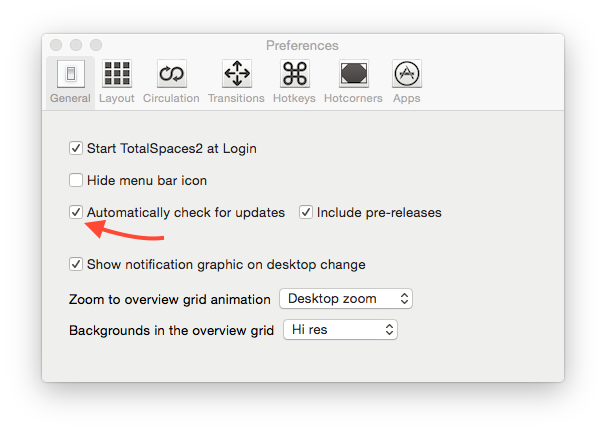 Not sure what you’re seeing with the lack of transparency. I usually leave space transitions off, but when I turn it on, everything is nice and smooth and there is no opaque grayness. Any way you could post a screen recording so the TS folks could see what you’re talking about?

TS2 checks for updates only once per day, so I’m not sure why it would show every hour.

The flatter design of the notification graphic is a matter of taste I guess, I’m sorry if you don’t like it.

I really love TotalSpaces, but I don’t like that you made the grid grey instead of transparent (with the grid I mean that which is visible in the middle of the screen when you switch spaces). If you have many spaces, the grid now covers a big part of the desktop, which I find a bit annoying. I understand that you’re going for a flat look, but perhaps you could add a checkbox choice for having the grey areas transparent instead, but leaving the borders exactly as they are?

Actually I made it possible to use the old graphic in the latest beta. You may download it here:

The setting works from the Terminal.app command line:

Another way to do it, that may be even better, would be to have the grid filled with images of the actual desktops, just like a miniature version of the “Overview Grid”. Then you could easily see where you want to go. I think I would prefer that even more than leaving the boxes transparent. Anyway, keep up the good work! You really saved the Mac!