Bring back the ability to set an arbirary number of rows

I’d like to be able to create more than four rows; as it is, I can create hundreds of desktops, but only up to four rows - why? I’d like to have a 6x8 grid, and I can’t figure any reason why that would be a bad idea.

There is a limit imposed by macOS of 16 normal desktops for your display. This can be somewhat circumvented by adding desktops on another monitor then unplugging it (so those desktops move to the main screen), but I wouldn’t particularly recommend 48 desktops, I think performance may suffer.

In that case, why am I allowed to create 64 desktops by adding columns? What if I run my screen in portrait mode and want a 2x6 arrangement?

I just don’t understand why the rows would be limited rather than the total number of desktops.

I’m fine with the fact that performance might suffer a bit; an efficient workflow is worth dealing with a little lag. Maybe just throw a warning if somebody creates more than a certain number of desktops?

You are right about that, it seems that the limitation on the number of desktops is no longer enforced by the operating system. What you can do as a workaround is to add many columns (and click Add desktops), then click the Columns minus button to remove columns, but don’t click the Remove desktops button. Then quit preferences. The next time you enter preferences they will be there normally. 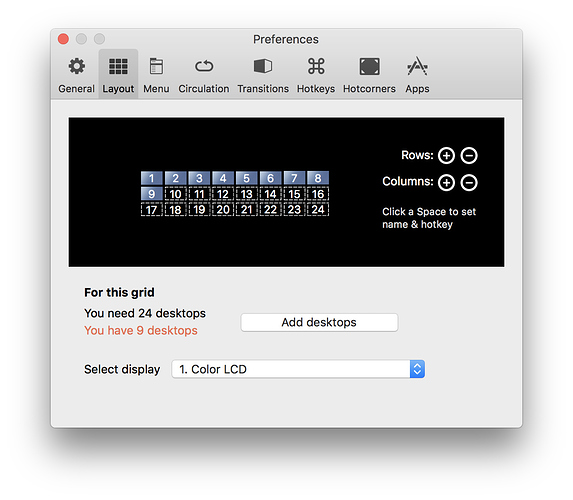 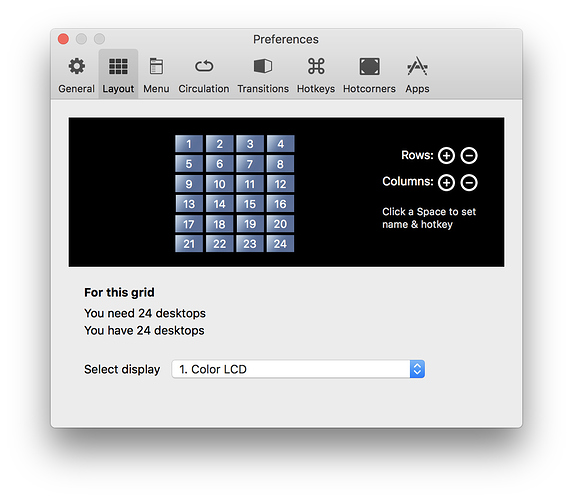